Welcome to Frensham Pond Sailing Club. Based on a beautiful lake in South West Surrey, the club welcomes new members, both experienced sailors and those wishing to learn. If you would like to find out more, please look further at our website or why not take the opportunity to visit and talk with the club manager or the clubs members. Frensham Pond is a club for all ages, all abilities and all seasons. 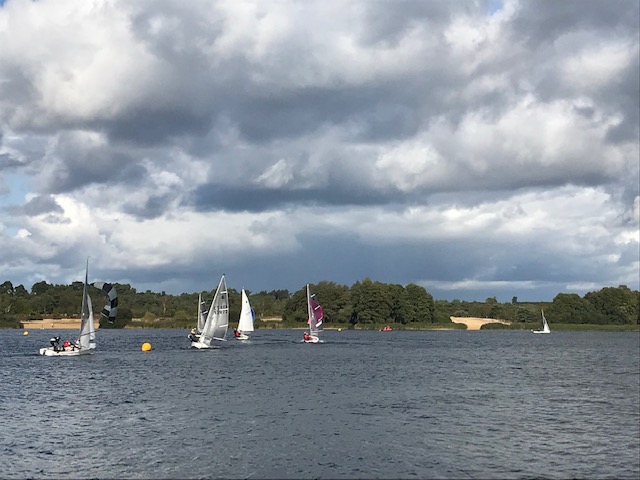 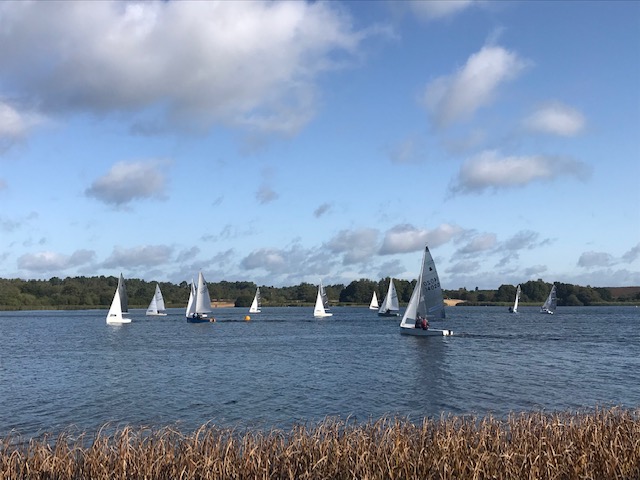 Three visitors joined eight local boats for Frensham`s annual GP14 Open Meeting which was the concluding event for the 2019 GP14 Southern Travellers Championship.  The forecast was for 14 to 28 knots, initially from the north-west veering later in the day to a point to the north, with the competitors being met by clearing blue skies, a welcome site after rain over the previous week.  Race officer Hugh Marston set a long course utilising the full length of the pond and got the first race away cleanly. Tomasz Szakola and Nia Williams from Welsh Harp led the first beat keeping the lead through the tricky conditions at the west end of the pond where the gusts and shifts made conditions very difficult.  Szakola and Williams were pursued by local sailor Bryan Taylor, who had teamed up with Richard Parslow from Hampton SC, Keith Street/Lucy Barrie from Welsh Harp and local pairings David Innes/John McGuinness and David Youll/Sue Collett, all chasing hard.  Visitors Richard Ham and crew Charlie Cotter (Tollesbury/ Welsh Harp) had a slow start having had to re-rig the mainsail after the 5 minute gun but they came through the pack to take fourth.  Taylor/Parslow took the win from Szakola/Williams in second and Street/Barrie in third.

After a welcome lunch the second and third races were held back to back with the wind strengthening and gusts getting even more vicious.  The Race Officer sensibly kept us away from the west end of the pond to everyone`s relief.   A massive pile up on the start line freed the way for Taylor and Parslow to get away cleanly with Youll and Collett showing strongly with local pairings of Stuart and Christine Duckworth, and David Hawkins and Phil Mutton sailing well on the first beat. Having cleared the debacle on the start line Street/Barrie and Innes/McGuinness began to show in the first group. It was only at this point we noticed that Richard Ham was missing and we found out later that a jammed centreboard had required shore surgery. The second race finished with Taylor/Parslow wrapping up the win from Street/Barrie and Youll/Collett in third.  Richard Ham rejoined for race three and took the win from Street/ Barrie in second.  Tomasz and Nia took third from Innes/McGuinness having recovered from a spectacular capsize on the run.