Welcome to Frensham Pond Sailing Club. Based on a beautiful lake in South West Surrey, the club welcomes new members, both experienced sailors and those wishing to learn. If you would like to find out more, please look further at our website or why not take the opportunity to visit and talk with the club manager or the clubs members. Frensham Pond is a club for all ages, all abilities and all seasons.

Congratulations go to Katrina Gilbert who won the Club of the Year Trophy in a thrilling finish.

Twenty one competitors started this pursuit race on a beautiful day blessed with a decent breeze. Amongst the boats was a club GP14 occupied by Steve and Glynn who only last month participated on an RYA Training course; well done to them. But it was Katrina who made up ground on the final push to home who beat John Townsley by just one second.

Thanks to the Race Officer, Ian Johnson, who ensured that all boats got away on time, and to his support team, on and off the water.

Here are two Club sailing events to note that are taking place in September. 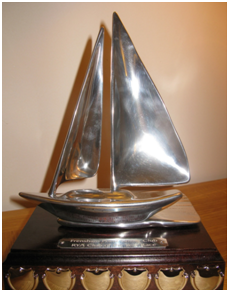 This is a pursuit race open to all with the first start at 14:27 pm.

The trophy was presented by John & Sally Townsley to commemorate the winning of the RYA Club of the Year Award 2009.

A Veterans race open to any helms who are aged 65 or over on the day of the event and may be sailed in any class of dinghy. Helms of 2 person boats may be crewed by a person of any age.

The trophy was Presented in 1977 by Dr Hugh Lankaster on his retirement as Commodore.

The Farnham Community Games take place on Bank Holiday, Monday 27th August between the hours of 12 noon and 5pm. The event is designed to celebrate the London 2012 Olympic Games and encourage more people to take up sport and join local sports clubs. The Games are supported by a wide range of public and sporting bodies and the concept of local 'Community Games' this particular year is being actively encouraged by the Government and LOCOG (the London 2012 organising committee). Many of the local sports clubs will be in attendance including our sailing club. All members and their families are invited to attend the event.

There will be two locations: the new Farnham Rugby Club and the Farnham Leisure Centre. There will be official openings at both locations and these will include the Olympic torch-bearers from Farnham. There will be taster sessions and fun for everyone on the day. Here are the sports represented:

Come along and support your local community, it’ll be a great day out.

This year the event was in aid of Farnham’s Abbey School whose children are keen supporters of Sailability.

The weather conditions varied with a shifting South Easterly breeze. Although the sun shone at times the event was sent periods of intense soaking rain. This did nothing to spoil the enjoyment of the nineteen competing crews sailing fifteen different designs of racing boat. Each boat sails a fifty minute stint and then makes a pit stop change of crew.

The set course took the boats to every part of the lake. The different designs are scored on a handicap system that makes the lake a level playing field. Throughout the ten hours the crews on the water were supported by family and friends ashore including many Cadet parents. An ice cream van for the children and entertainment by a rock musician enlivened the shoreside, while the galley, kitchen was kept busy through the day as crews changed shifts on the water.

As the last boats finished ,crews and supporters crowded the club house for the post race barbecue followed by the prize giving.

Special thanks were given to the organising team; Karen Ferguson, Kim Davies, Sally Townsley and Ian Hiscocks. To race officer: Tim Hemsley. To the timing team: Graham Howlett, Pat and Sue, who manned the race line computer throughout the day and posted updated results each hour. Especial thanks went to the galley team of Sala and the kitchen girls. And of course the BBQ team: Steve White and his children. Not forgetting the safety boat crews who kept an eye on the water through the day.

If you have raised money for the Abbey School then please hand cheques or cash to the Club Manager, Julian Davies, or any member of the General Committee. It is not too late to make a donation towards the school, your contribution will be very much appreciated and will help to enrich the lives of the students.